There is a restaurant in Tampa, Florida, called Bern’s Steak House, which used to be famous for  having the greatest wine cellar in Florida.  That might very well have been true as this was the late 60’s, and America had not yet gotten into its wine-crazy days.  Anyway, the first time I was taken there (since it was also famous for its dry aged steaks), I saw that they had steak with pasta for a side dish.  I had never heard of that, but I can only tell you that it is a wonderful combination.

Even though decades have passed,  I still love a good steak accompanied by a yummy pasta salad. Here in Palm Beach spring has already arrived (yesterday was in the 80’s), and that brings thoughts (to me at least) of summer barbeques.  If you are not lucky enough to be in South Florida, you can still practice with this meal, one of my very favourites.

GREAT BROILED STEAK WITH A SIDE DISH OF PASTA 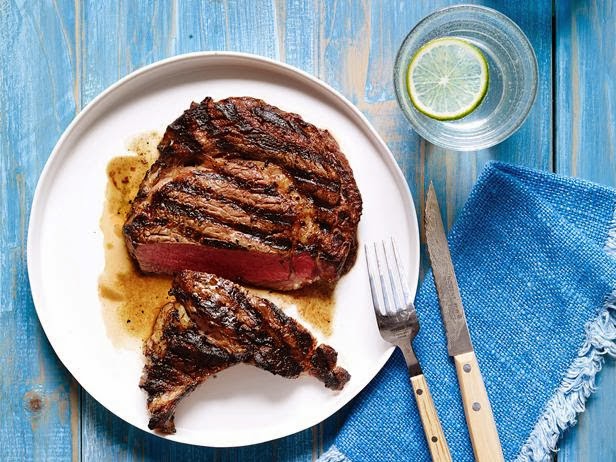 Now, there are certain things you MUST have to make this dish:
1. A gas broiler or salamander—if not, wait for those barbeques
2. A  really good, very sharp knife—it needs to be heavy at the spine and razor sharp in order to chop tomatoes
3. A really good pepper grinder such as a Peugeot

STEAK for two
Ingredients:  a very good strip steak, large and at least 1 ½” thick—I like the grass-fed
Steaks from Whole Foods.  This steak should weight at least a pound
A red chili-pepper infused olive oil such as Pepperolio from Colavita
A good steak seasoning such as Whole Foods own or McCormick Montreal Steak
Fresh new black peppercorns (I keep mine in the freezer)
2 really good medium sized tomatoes—ours come from the Everglades area now, and are quitegood—tomatoes must be good for this dish or omit them
A nice sized handful of fresh basil--I grow my own herbs
A smallish half-handful of fresh Italian parsley
Olive oil
Freshly chopped good aged Reggiano Parmigiana

At least an hour before broiler pour the tiniest bit of the Pepperolio on the steak and rub it around so that the entire steak is covered, including the fat.  Then sprinkle liberally with the Steak Seasoning—depending on the size of your steak) and give it at least 10 twists of the pepper grinder.  Let it sit on its broiling pan—if you want to cover it lightly, please do, but don’t let the covering touch it or it might remove some of the seasoning.

20 minutes before serving, bring a pot of water to a high boil.  Salt it and add ½ bag of a good pasta—any shape, and bring back to a boil giving it a stirring if it seems stuck together.  Cook according to suggested time on pasta bag.

Turn broiler on high and with rack quite close to the flame.  When it is at full flame, put steak under the fire and broil quickly, getting to a charry crust in places on the surface of the steak, and turning it once only.  Should cook in about 10-11 minutes for charry outside, then pink, then red in the very middle.  Take out of flame and put on cutting board to rest.

Drain pasta quickly.  While draining, coat the bottom of the pasta pot with a thin layer of good olive oil.  Turn heat to low and add back the pasta and any little bit of water that remains.  Add quickly the chopped tomato, herb, cheese mixture, stir in. 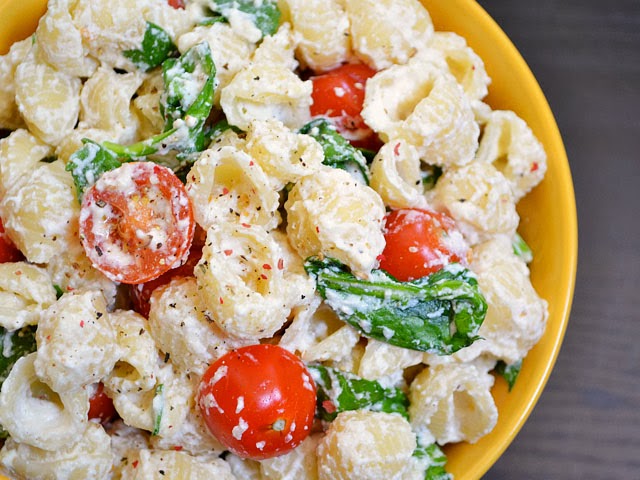 Slice the steak thinly and serve along with the pasta.  This is a great meal which can be made very, very quickly.  In fact, it must.  That’s why the practicing is good.

I don’t serve anything with this for just Ridgely and me, but if you had people over, and had double the recipes or more, you could have a good crusty bread to mop up the steak juice.  Yummy.