Back in June of 2012 I did a "Before and After" post, with the promise that I would finish it--I only showed the before pictures and some of the process-- once the job was completed, and once I had the final pictures. The project, which was to be a wonderful, light and airy and clean-cut and contemporary place for the young married children of clients we have, is finally finished, so I am back (chided by my favorite commenter and fellow designer Dean Farris) to show you the beautiful results.


Now keep in mind that these clients (the parents) live in the same building, right next door, but their apartment was quite traditional, and the kids wanted to be a bit more hip.  There was a slight problem herein, in that the mother wanted to use a bunch of furniture which she had gotten from her mother, not at all what the younger generation had in mind, and also, since it would be, in essence, a “guest house,” the parents wanted the budget contained.   These clients also love colour, and wanted it to be a place where children could wander around without too much fear of ruining the furniture.

Here are some picture of the apartment before... 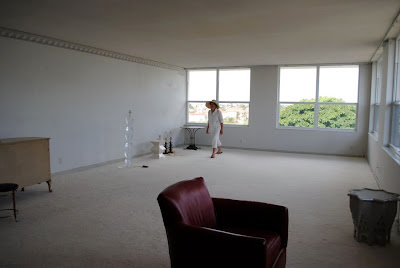 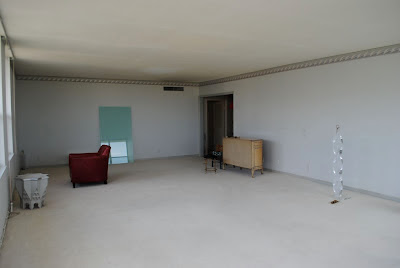 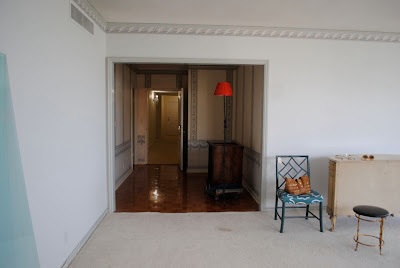 As you can see, it was pretty depressing. The previous owners had lived in the apartment for almost fifty years, and it was decorated to their ideas at the time—believe it or not, it had never been changed, but the building, The Lowell House, was a good one; the location, right on the Atlantic Ocean and in walking distance of all of the Worth Avenue section with its shops and restaurants. Also, Michael Burrows, who originally built the building, was known for building good buildings. My husband, Ridgely Foster, who is a realtor at Sotheby’s, walked through the apartment with me, and he pointed out how, even after all this time, the apartment was basically in such good shape. He truly believes in Michael Burrows’ buildings—a little factoid: Michael Burrows built quite a few buildings here in Palm Beach, all of them good, and they are named after the houses at Harvard, his alma matter—thus Winthrop House, Lowell House, Dunster House, Kirkland House, etc.

But let's get back to decorating. After figuring out what would stay and what would be changed, we decided on a colour scheme of light, bright and very plain finishes.  The bedrooms and the Living/Dining Room in this apartment were spacious and sun-filled, and the view in the Living Room, although not of the ocean itself, was a good “tropical city” one of trees and buildings creating a skyline. Take a look at the beautiful finished rooms, which correspond to the drab "before" pictures above... 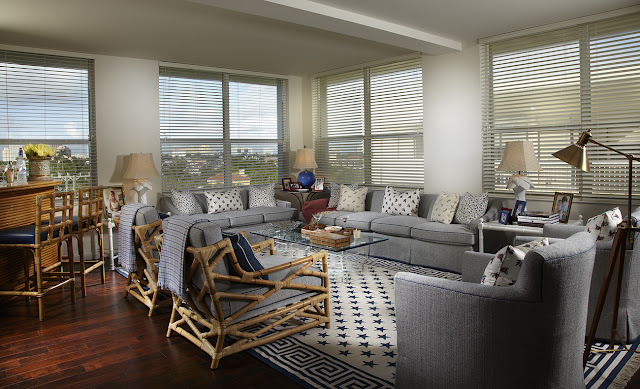 For the blue and white Living Room/Dining Room we started by having James Garza paint the entire room in Benjamin Moore's "Cotton Balls," a lovely and airy white that looks just as it sounds. We also had Paul Maybaum make these sleek Venetian blinds for us, and we replaced the drab white carpet with kid friendly chocolate brown engineered wood by Cavastone. For this job, we chose Pete Lewis, because Pete is one of those people who can just do about anything—in this case, installing the floor and the wall to wall carpet where used. For the furniture, we mostly took old things that we no good and made them beautiful again, although we did get some new things like the fabulous Stark rug and the custom made bamboo chairs, which you can get exclusively through us. The red leather chair you see in that first picture where I am walking around the apartment, was recovered and made into a pair. The sofa was also re-covered and a mate was also added. For these pieces we used a great fabric from TRS Furniture and Textiles, a fabric so reasonable it doesn’t even have a name, just a number, 58-192. But it is great looking, and made to be used on commercial furniture, so it should stand up to the ravages of a family. 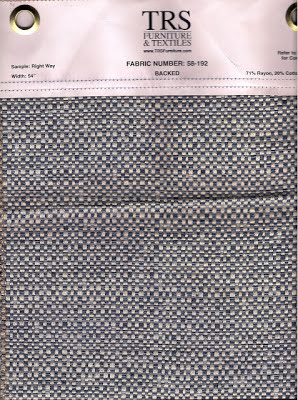 Most of the new furniture we did bring in was from antique stores and tag sales. The bamboo bar is from Objects in the Loft, the zinc-top cafe able in the corner is from Faustina Pace, and the lucite and glass coffee table is from Palm Beach Modern Auctions. The big blue lamp is from the James and Jeffrey tag sale, and the white lamps, which I love, were brought in from my clients' bedroom, and the lampshades, which were also her own, were recovered in remnants. The accessories you see throughout are all stock from Leta Austin Foster Boutique.

For the Entry Hall a great wallpaper was chosen from Les Indiennes which would be used in conjunction with a “tile” paper from Schumacher and another paper, a stripe from Les Indiennes, which would be cut up and applied as a “molding”. We used this same idea, but in a smaller and more open design, in the long narrow hall that leads to the bedrooms. (One of the wonderful things about Michael Burrows apartments is that he designed many of them with a hall between the living (“public”) and the private (bedrooms and baths). It sounds very simple, but believe me, it creates a better apartment.) The beautiful console below is from Palm Beach Modern Auctions, and the rug is the client's own. The flower vase is from Cashmere Buffalo and the mirror is from D&G Antiques. 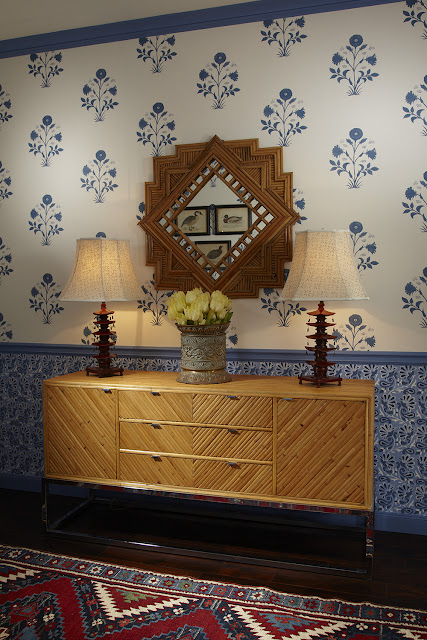 For the dining room we continued the theme of using what the client already owned and kept her dinning room chairs, but had them re-painted in bright, glossy white by Steve Falconer, as well as the console, which got a facelift and new hardware from Andersen. The dining room chair cushions were recovered in a blue vinyl from Nance, which will stand up nicely to wet bathing suits and food stains.  The lucite and glass table is from Cashmere Buffalo, and the Moroccan screens and Indonesian shadow puppets are from D&G Antiques in West Palm Beach. The brown cabinet belonged to the client's mother, and the hurricane lamps and metal ball are from the James and Jeffrey tag sale. All accessories you see on the table are stock from Leta Austin Foster Boutique. 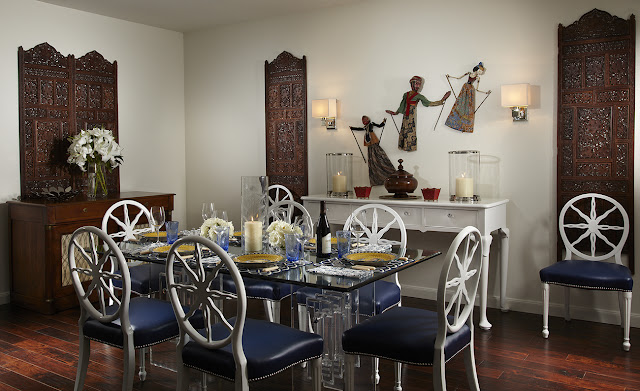 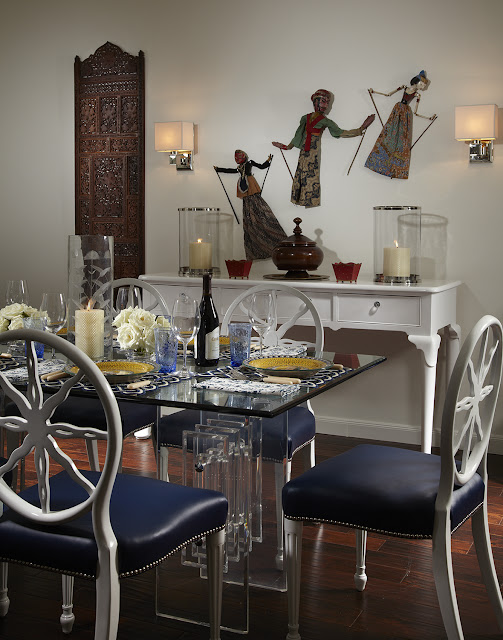 Even though the Living Room/Dining Room had a beautiful view and lots of light, the halls, kitchen, and bathrooms, however, had no windows, so we needed to create some interest for those—always remembering that the budget did not allow for architectural changes that were for décor only—in other words, no moldings, no beautiful doors—and rather, work with what we had in that situation. We did need to change the bathrooms—right down to the studs—and bring the kitchen into the 21st century. Here is the kitchen  before.... 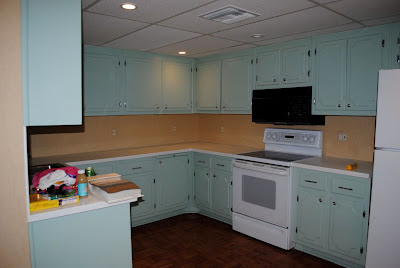 And the newly updated version, after the renovation... 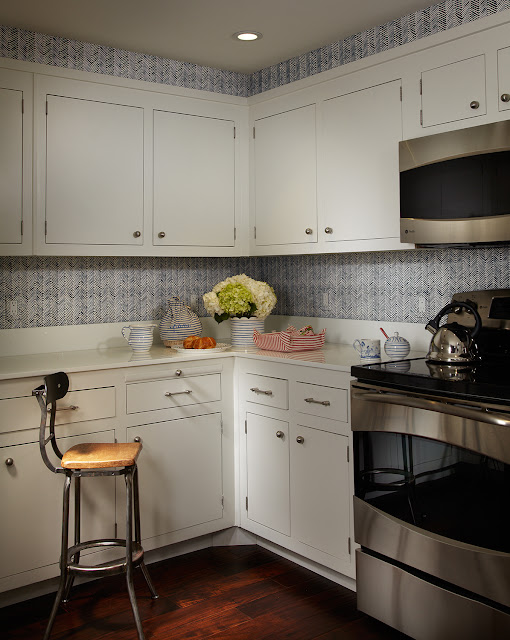 For the kitchen we used again the same engineered wood floors by Cavastone, and all cabinet fronts were designed by Patrick Darczuk and finished in "Chantilly Lace," another great white by Benjamin Moore. They also got new hardware from Andersen, which helped make them a bit more modern. The wallpaper is "Petite Zigzag" in blue from China Seas, which I tend to use a lot because it comes in lots of colours and is washable.  The stool is from Faustina Pace. 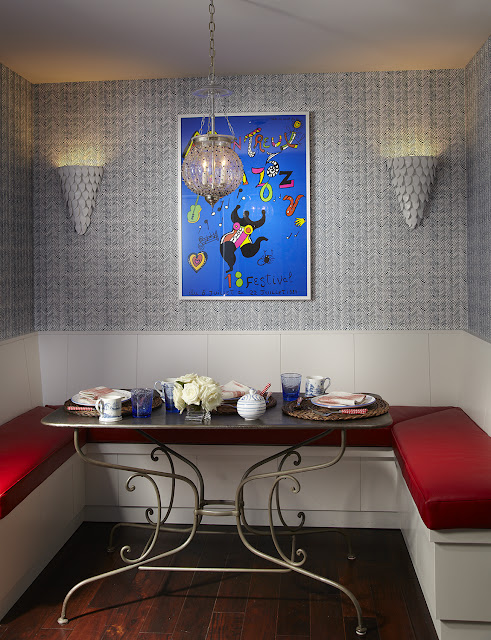 Since the client wanted a colorful kitchen that was also kid friendly and easy to clean, we kept it as simple as possible and went to Patrick Darczuk again who designed this banquette, which we had upholstered in bright red vinyl by Nance. The antique table is from Fasutina Pace, while the poster is from Palm Beach Modern Auctions, with a frame by Signature Designs. The wall lamps are actually antiques which were made into lamps for us by Alan J. Alan, which is were we also found the wonderful hanging lamp we used. All china and table accessories are from Leta Austin Foster Boutique.

Next up are the bathrooms which were in dire need of a complete overhaul. Take a look at the scary "before" pictures of the master bath and dressing area... 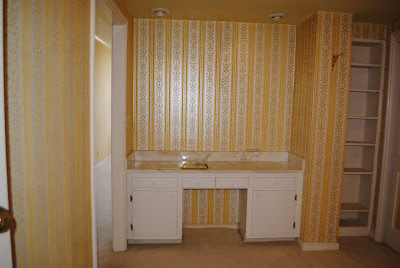 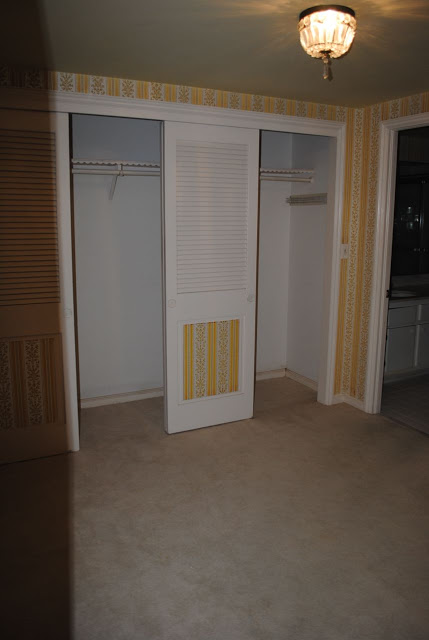 And the beautiful "after" ones... 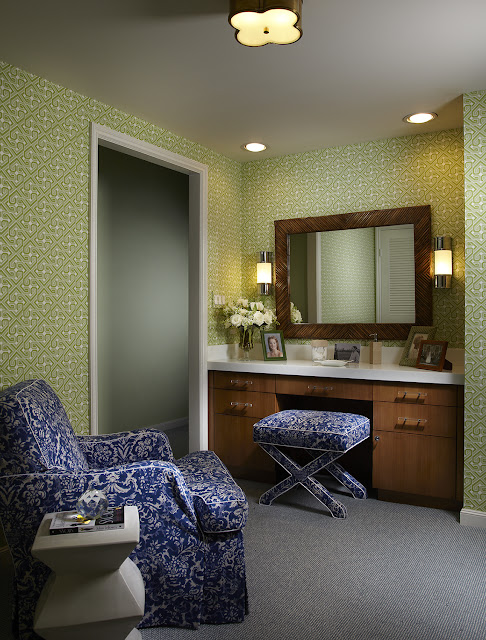 Now, like the kitchen, the bathrooms were the one that needed the most work. For this we called upon Roger Fortmeyer and Matt Beasley, of Oceanfront Contracting, Pannill Electric, Adams Plumbing, and finally Patrick Darczuk to design and make our cabinetry, which the clients wanted to be modern and hip, and inspired by the book "The Light of The Sea" by Jean-Loup Daraux. 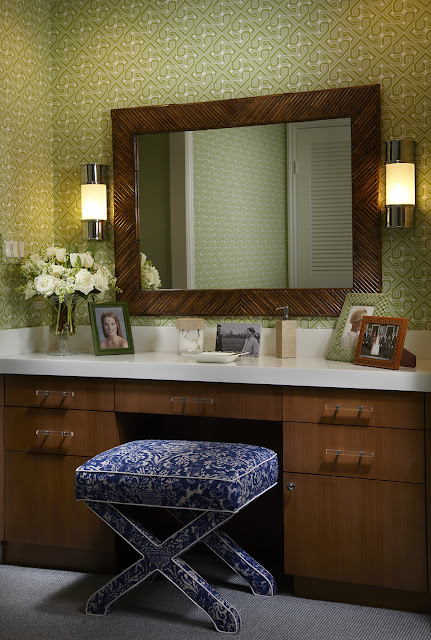 As you can see they did an excellent job, which was complemented by a Cavastone top, Andersen harware, wallpaper by Meg Braff--which she designed from prints by her uncle Philip Graf--and the beautiful wall lamps by Visual Comforts.  The mirror is custom made for us, and the accessories are all stock at Leta Austin Foster Boutique. The rug is from ProSource, and the stool was custom made for us by Ven Tran.

The guest bathroom needed the same kind of update, so we used the same great people, and kept the same style of cabinetry. The only difference was the Les Indiennes wallpaper and fabric (on the little antique stool from the James and Jeffrey tag sale) and the rounded mirror, which is custom and available through us at Leta Austin Foster. 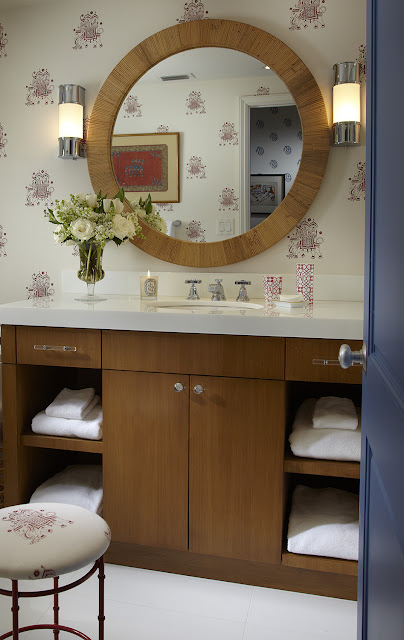 And now for the bedrooms. We settled on a scheme of bright “your-first’ blue-crayon” and lime green for the Master bedroom, and a scheme of pink and red and green and white for the guest room. My job was to bring it all together, but with China Seas, Meg Braff, and Les Indiennes as the wallpapers, and Pindler and Pindler and Link as the basic upholstery fabrics for these rooms. Look at the two rooms before... 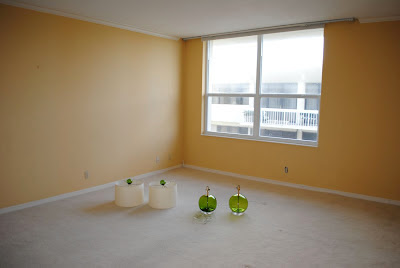 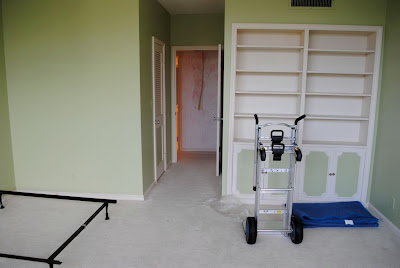 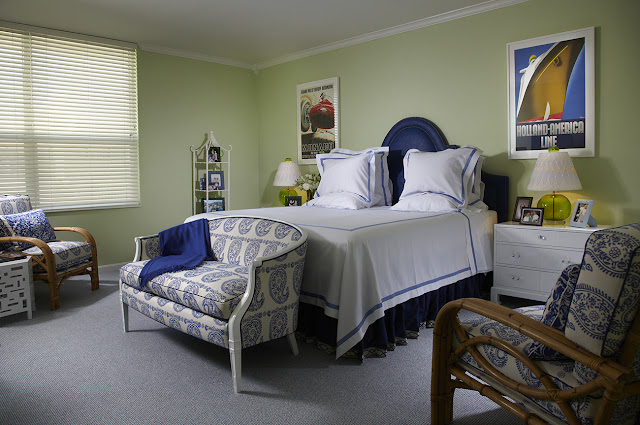 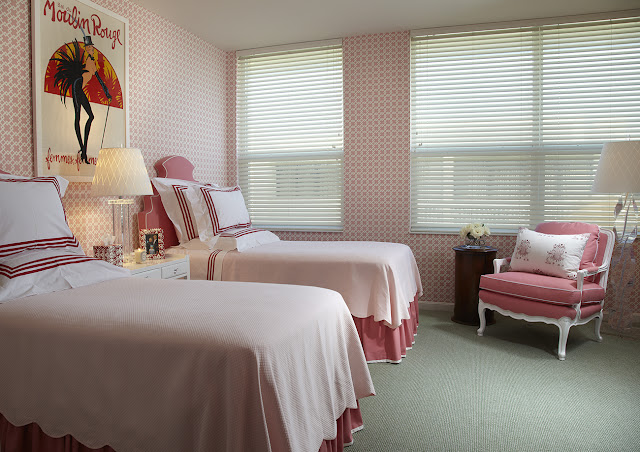 For both rooms we chose rugs from ProSource in West Palm Beach, which were installed by Pete Lewis. In the master bedroom we kept the client's own bedside tables and had them painted bright, glossy white, while we changed the hardware to match the one in the dressing area. The bench also belonged to the client's mother, so we re-coverd it in a fabric by Perennials, while the headboard was re-covered in blue vinyl from Nance. The prints are from the New York Times store, and the frames are from signature designs. All linens and accessories are from Leta Austin Foster.

For the guest bedroom we used "Aga" wallpaper from China Seas, and we recovered the headboards in a matching pink fabric. We used the client's own bedside table and chairs, but had them repainted and re-covered, and the two acrylic lamps and prints are from Palm Beach Modern Auctions. Bedding is by Matouk, through Leta Austin Foster Boutique.

I know this post was a little long, but they good ones always are. What do you think of the finished rooms? They really did turn out beautifully, didn't they? 'Till next post.